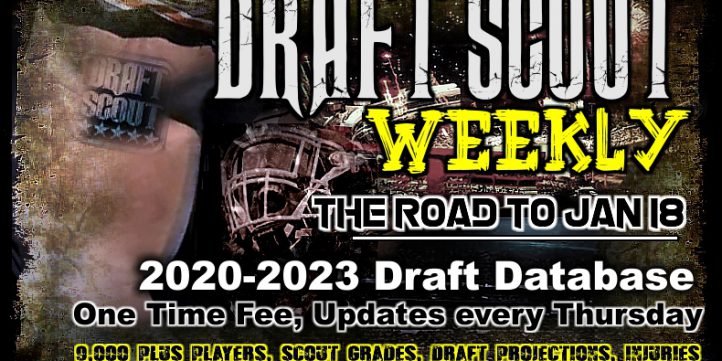 End of Season Edition in Progress
Building Towards January 20, 2020

Not all ACC seniors have been cross checked yet, working on those
and the rest of the Div 1 Team players, Sun Belt/AAC/Conf-USA/Mountain West/Indy’s
will be done by next Thrus.

“Early” Row has been added to the DraftEligible Spreadsheet
Tracking which underclassmen have offically announced vs projected from the weekly top 100 ratings
since Week 1.

-Draft Scout 2020 (3129 Players, All Seniors, All Divisions Combined)
Over 3,000 Players test for the Pros each spring, this number will be declining as
players who were injured and redshirt move back a year, backups, underperformers, etc., are turned off.

PLEASE NOTE: This is a ONE TIME Database Export Timestamped Dec 12, 2019 Purchase.